Our editors pick the products & services we write about. When you buy through our links, we may get a commission. Learn more.

Without a working battery, even the best engine can’t start. Few things mess up your day as quickly as a dead battery, which leaves you either begging strangers for a jump or waiting for AAA to come and save the day.

How do you avoid this? It starts by getting a reliable battery. Investing in a DieHard battery charger can also help you get the most out of your car’s battery. The best battery chargers not only keep your battery fully-powered but tell you when they need to be replaced.

We’ve picked out the 5 best DieHard battery chargers below. Check out the full reviews below to help you find the right charger to keep you on the road in 2020.

Its smart microprocessor-controlled multi-stage charging makes it a hassle-free way to charge and maintain any battery. Keep your batteries ready when you need them without the worry of overcharging.
Check Price at Amazon

The DieHard 71345 Platinum Smart Wheel Battery Charger is a powerful, versatile charger and maintainer. Its smart microprocessor-controlled multi-stage charging makes it a hassle-free way to charge and maintain any battery. Keep your batteries ready when you need them without the worry of overcharging.

You’ll also get more amps for jumping dead batteries with the DieHard 71345 Platinum Battery Charger. With up to 275 amps, it can jump-start any vehicle battery, even in extremely cold conditions. The usefulness of this feature is somewhat limited by the DieHard 71345’s size. At almost 40 pounds, it’s not exactly portable. You’ll mostly want to use it in your home garage.

Speed is another advantage of the DieHard Platinum Battery Charger. The boost mode provides up to 60 amps for rapid charging, getting you back on the road faster. If you’re looking for the DieHard battery charger with the most power, you want the Platinum Smart Wheel in your garage.

The DieHard 71345 Platinum Smart Wheel Battery Charger has the amps to jump dead batteries and recharge them quickly, though its high weight and cost turn some users off. 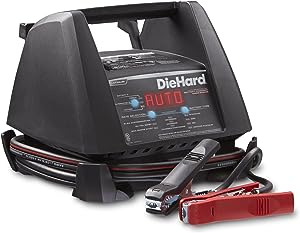 The best DieHard battery charger for a balance of power, portability, and value.
Check Price at Amazon

The DieHard 71328 Platinum Shelf Smart Battery Charger offers the same multi-stage intelligent charging as the DieHard 71345 Platinum Smart Wheel version. While it’s not quite as powerful, it’s about half the weight and cost. It’s the best DieHard battery charger for a balance of power, portability, and value.

The scrolling display on the DieHard Platinum Shelf charger doesn’t just show your charge status. This charger has a built-in alternator tester, helpful for diagnosing electrical issues. Features like that are why we say the Platinum Shelf Battery Charger is DieHard’s most user-friendly battery charger.

You can also jump-start most batteries with the DieHard 71328 Platinum Shelf charger. Its maximum amp power is lower than the Platinum Wheel Charger above, so while it can jump most vehicles easily, it may struggle with larger engines in cold weather. That’s the main potential disadvantage of this powerful, versatile charger.

The DieHard 71328 Platinum Shelf Smart Battery Charger can jump, charge, and maintain any battery, with the boost power to get the job done quickly. 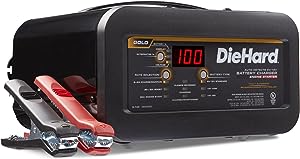 DieHard’s Gold line of chargers is designed for versatility. The DieHard 71326 Gold Shelf Smart Battery Charger is great for cars, motorcycles, and small vehicles like ATVs and riding lawnmowers. Though its jump-starting capabilities are more limited, it gives you consistent power at a great value.

There is an alternator test function included on the DieHard Gold Shelf Smart Battery, as well. Performing tests or changing charging modes is as simple as pressing a button, and it has automatic mode switching for long-term maintenance.

The DieHard 71326 Gold Shelf Smart Battery Charger has jump capability. Having said that, it only provides about 80 amps, so it’s not the best charger to rely on in an emergency. The boost mode power is also lower than with the models above. You can charge batteries relatively fast, but not at the lightning speed you’ll get with the Platinum line.

The DieHard 71326 Gold Shelf Battery Charger is a versatile option for any home garage thanks to its diagnostic functions and quick-charge boost mode. 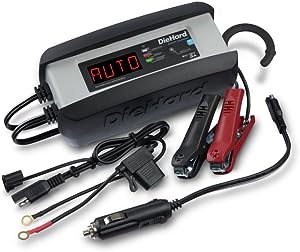 The 3-amp charging of the DieHard Compact Battery Charger is the best DieHard battery charger for motorcycles and ATVs.
Check Price at Amazon

You might be wondering why a battery charger needs Wi-Fi. The truth is, it’s a pretty handy addition to the DieHard 30485 Compact Wi-Fi Smart Battery Charger. By pairing it to your phone or tablet, you can monitor the charge status, stop the charging, or re-start charging remotely.

The 3-amp charging of the DieHard Compact Battery Charger is the best DieHard battery charger for motorcycles and ATVs. Car batteries will take a while to fully charge, especially if they were deeply depleted. You don’t have to hover over the charger, though. Even if you don’t use the DieHard app, it has automatic maintenance to avoid overcharges.

Another reason this DieHard 30485 Compact Battery Charger is great for off-roading is its compact design. It weighs just a couple of pounds and fits easily into any bag. You’ll also get a wider range of connectors, including rings and an accessory plug in addition to the clamps.

The DieHard 30485 Compact Wi-Fi Smart Battery Charger lets you monitor your charge remotely, with a compact build that makes it perfect for motorcyclists and off-roaders. 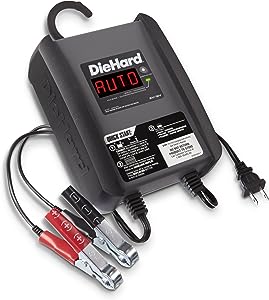 The DieHard Compact Smart Battery Charger uses a streamlined design in every sense of the word. It’s a compact unit, and light enough to take with you anywhere. The interface is as simple as they come, too, with an easy to read scrolling digital display.
Check Price at Amazon

Finally, here’s an option for the budget-conscious consumer. The DieHard 71321 Compact Smart Battery Charger offers multi-stage 6-amp charging for about half the price of the models above.

The DieHard Compact Smart Battery Charger uses a streamlined design in every sense of the word. It’s a compact unit, and light enough to take with you anywhere. The interface is as simple as they come, too, with an easy to read scrolling digital display.

Having said that, the features are pared down, as well. While the DieHard 71321 Compact Battery Charger has automatic voltage detection, it doesn’t include things like alternator checks or boost mode. Still, if all you need is a safe, easy way to charge your 6-volt or 12-volt batteries, this DieHard charger is a money-saving option.

The DieHard 71321 Compact Battery Charger is an excellent value for the money, and is both very portable and easy to use.

How do you choose which DieHard battery charger is right for you? It really comes down to how you plan to use it. Let’s look at some of the most important factors likely to influence your decision.

If you mostly charge batteries in your garage at home, the portability isn’t much of a concern. For off-roaders and travelers, though, it’s a more pressing concern. In those applications, you want something you can throw into your glove box or backpack.

Chargers that are heavy and bulky are more difficult to take with you on the go. The main disadvantage of portable chargers is they tend to have lower capacities. Portable battery chargers often don’t charge as quickly or have as many battery recovery features.

The more amps a charger can deliver at once, the faster it will charge a battery. Keep in mind a higher charging rate also makes overcharging more likely. If you want a fast charge, it’s best to go with a smart charger that has built-in overcharge protection.

DieHard battery chargers with boost mode give you variable charging rates. Turn on the boost for a quick charge, then turn it off to maintain batteries with no risk of damage.

All batteries gradually wear out over time, but misuse and abuse can speed up their aging process. When batteries sit unused for extended periods or get depleted too far, the plates inside the batteries are fully restored by recharging as they should be.

Many chargers offer repair modes that use an electrical pulse to un-do these effects. While they can’t extend a battery’s use forever, they can add years to its usable lifespan. Most chargers with battery recovery features also include test functions, so you know if the battery’s too far gone to save.

It’s not always the battery’s fault that your car won’t start. DieHard chargers with alternator testers prevent you from wasting time and money troubleshooting the source of electrical issues. Many DieHard chargers also test the performance of the battery itself, letting you know if it’s time to recondition or replace it.

How do I use a DieHard battery charger?

Can all DieHard battery chargers be used on motorcycle batteries?

Yes, these chargers can be used on motorcycle batteries, in both 6-volt and 12-volt sizes. Most of them also have automatic voltage sensors. If they don’t, make sure the charger is set to the correct battery voltage before starting to charge.

Can I use these DieHard battery chargers on marine batteries?

How does a DieHard battery charger recover dead batteries?

How does very hot and very cold weather affect the use of DieHard battery chargers?

Batteries operate more efficiently the warmer they are. When the weather is below freezing, batteries will be more resistant to jumps and slower to charge overall. You can see this reflected in the “CCA” rating, which stands for “Cold Cranking Amps” and is usually lower than the CA rating.

In very hot weather (over 90°F) batteries are highly efficient. Use more caution when charging or jumping batteries in hot weather, as they’ll be more likely to produce sparks, burst, or explode. Allow your engine to fully cool before handling the battery. You should also move the vehicle out of direct sunlight and use gloves and eye protection to avoid injury.

How long does a DieHard battery charger last?

Because they take power straight from the wall rather than a battery, battery chargers should last for many years unless they’re damaged. While DieHard battery chargers are pretty hardy, they will break if dropped or left in the rain.