No one wants to spend time thinking about their car’s antifreeze. Yet, when it’s time to top up your car, you may find that your vehicle uses green, red, orange, blue, or purple antifreeze. The question lingers with the most common ones, red and green; can you mix red and green antifreeze?

Antifreeze is one of those vehicle fluids that is never a good idea to mix. Manufacturers choose specific colors to differentiate between antifreeze chemical compositions. Therefore, combining them can cause problems for your engine.

This post discusses antifreeze and what happens when you mix red and green antifreeze. Finally, I’ll recommend the best antifreeze brands for the utmost boilover and freeze protection.

Most people know that antifreeze is an essential fluid in their engine. However, few understand what it is and how it works.

Antifreeze is a colored liquid mixed with water and added to the vehicle’s coolant reservoir. Pure antifreeze contains ethylene glycol or propylene glycol as the base. It may also contain nitrates, silicates, borates, or azoles that prevent rust and corrosion.

Read more: Coolant Boiling in Reservoir: The Causes and How to Fix It

How does antifreeze function?

Antifreeze needs mixing with water in a 50/50 ratio. Nevertheless, some antifreeze products are already premixed, so it’s a good practice to check the label to know whether you need to add water or not.

The resulting antifreeze and water mixture regulates the engine’s temperature and keeps it operating at optimum levels. In essence, it’s pumped throughout the engine’s various parts and absorbs the heat. Then, it goes back to the radiator, where it’s cooled before recirculating again.

Antifreeze operates in temperatures as high as 275°F and as low as -34°F. Therefore, it prevents liquid from boiling and prevents it from freezing in extremely low temperatures.

Apart from keeping liquids in the proper state, it also acts as a lubricant on various engine parts. For example, it keeps the water pump moving smoothly by preventing friction that can cause the engine’s temperature to rise.

Additionally, antifreeze prevents corrosion and rust. Remember that water alone can rust cooling parts. Hence, the various additives inhibit rust from forming and damaging the water pump, radiator, and other cooling system parts. Furthermore, it does not harm plastic and rubber hoses.

Read more: Coolant vs. Water: Which is cool for your radiator?

Antifreeze comes in six colors (green, red, blue, purple, orange, and yellow). These colors signify a significant difference, including the vehicles that can use them. Here are the most common colors.

Antifreeze green color is the oldest available type in the automotive industry. This antifreeze uses (IAT) Inorganic Additive Technology in the formula, and it’s in cars made before the year 2000.

As old-style antifreeze, its glycol lasts only two years or a max of 15,000 miles. It uses silicates and phosphates as rust inhibitors. You’ll find it in older GM, Ford, and Chevrolet vehicles.

Red antifreeze is popular since it’s the new type in most modern vehicles. This type of antifreeze is often called Dexcool and uses Hybrid Organic Acid Technology (HOAT). The antifreeze also includes phosphates and organic acids for the corrosion inhibitors.

Red antifreeze is usually in European, Japanese, and Asian vehicles such as Toyota, Nissan, Honda, Hyundai, Kia, etc. It lasts around five years or 150,000 miles. When you mix it with water, it turns pink, but it’s red in its bottle.

This antifreeze is made using Organic Acid Technology (OAT) and azoles and organic acids as rust inhibitors. It’s geared towards vehicles with lots of nylon and aluminum parts instead of steel parts. Hence, if your car has an aluminum radiator, you will find this type of antifreeze. In any case, newly manufactured GM, Chrysler, Buick, Cadillac, Ford, Saab, and VW vehicles use it.

This type uses Silicated Hybrid Organic Acid Technology (SI-OAT). In addition, it has silicates and organic acid in its rust inhibitors. Vehicles that use purple antifreeze include Mercedes, Audi, VW, and Porsche.

Red and green antifreeze: The similarities and differences

Both green and red antifreeze have Ethylene Glycol (EG) as the base, and they are mixed with water to provide the cooling properties desired in an engine.

Can i mix red and green antifreeze?

No. Mechanics advise against mixing red and green antifreeze. It’s usually challenging to flush out green antifreeze entirely from a vehicle. When you add red antifreeze in an older car, it tends to gum up and form a gel. Hence, it will end up clogging various parts of your vehicle’s cooling system.

On the other hand, adding green antifreeze to a vehicle that’s supposed to use red antifreeze will contaminate the Dexcool. Since green antifreeze has silicates to prevent a galvanic reaction, the components are abrasive and are not compatible with modern water pump seals.

What happens if i add the wrong antifreeze in my car?

Mixing antifreeze is not detrimental – at least not right away. Since antifreeze has a pH of 10.5, there won’t be any strong reaction. Nevertheless, many things will be happening as the coolant circulates the engine.

Mechanics use a machine to read the freezing point of the antifreeze in your system. A cooling system with the wrong antifreeze produces an inaccurate reading. Thus, in winter, when it gets frigid, your engine may end up cracking.

Corrosion and damage to components

Most coolants form a gel-like substance when you mix them, and this reaction prevents coolant from flowing because it will cause blockages. Therefore, the engine will overheat, leading to damage to the engine parts, water jackets, radiator, and heater core. The water pump can also overheat and fail in extreme temperatures.

Impairment the performance of additives

Different antifreeze types have specific anti-corrosion additives. Hence, mixing prevents the corrosion inhibitors from controlling scale and rust buildup. You’ll usually notice that the color of the antifreeze changes from red or green to a rusty/brown color. This is because the rust inhibitors have broken down and are no longer functioning.

To this end, it is best to stick to the antifreeze that your car is meant to use. You can check the manufacturer’s recommendations in the type and brand and stick to it for as long as possible. It’s also nice to have an extra bottle of antifreeze in the trunk to top up just in case of coolant loss on the road.

How to fix the wrong antifreeze mixing problem

Mixing antifreeze is not a death sentence for your car. However, you should flush out the system as soon as you realize that you’ve topped your vehicle with the wrong antifreeze.

Follow these steps for fixing the wrong antifreeze mixing problem at home.

You can repeat this step one to two times if there’s lots of gummy antifreeze and debris in the system.

Read more: Low coolant light: Is it dangerous? And what should I do?

Best antifreezes for your car 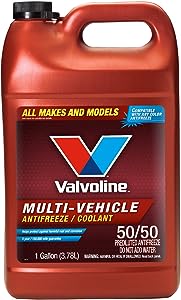 Valvoline Multi-Vehicle 50/50 contains pre-diluted antifreeze that’s ready to use. It also has Alugard Plus, a unique additive that makes it compatible with all other antifreeze types on the market.
Check Price at Amazon

For anyone not keen on the kind of antifreeze that goes into your car, grab the Valvoline universal antifreeze. This bottle contains pre-diluted antifreeze that’s ready to use. It also has Alugard Plus, a unique additive that makes it compatible with all other antifreeze types on the market.

You can use Valvoline in all vehicle brands, years, and mileages. It does not contaminate your current coolant, but it keeps performing in tip-top conditions. Valvoline protects against boilovers in hot weather and freezing up that could crack the engine in below zero weather. 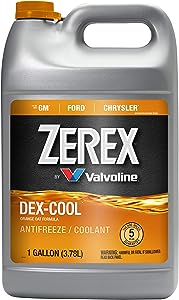 If you’re looking for a GM-approved antifreeze, it’s got to be the Zerex Dex-Cool model. This antifreeze comes as a concentrate that needs diluting in a 50/50 ratio. The product uses a patented carboxylate formula that skips silicates, phosphates, nitrites, borates, and amines.
Check Price at Amazon

If you’re looking for a GM-approved antifreeze, it’s got to be the Zerex Dex-Cool model. This antifreeze comes as a concentrate that needs diluting in a 50/50 ratio. The product uses a patented carboxylate formula that skips silicates, phosphates, nitrites, borates, and amines.

This antifreeze has 150,000 miles or five years of service life. You can use it in various GM, SAAB, Chrysler, and Ford vehicles. 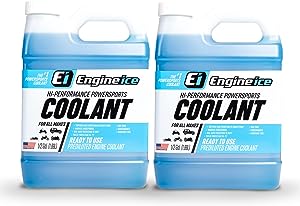 Engine Ice claims to be a top-of-the-line coolant. It comes premixed and uses propylene glycol as the base, which is considered safer in the environment in case of leaks or spills.
Check Price at Amazon

Engine Ice claims to be a top-of-the-line coolant for a good reason. Firstly, it comes premixed, so it’s ready to use. Secondly, it uses propylene glycol as the base, which is considered safer in the environment in case of leaks or spills.

Engine Ice can lower the engine’s operating temperature by ten to fifteen degrees out of the bottle. In addition, it ensures that your motor does not lose any horsepower. The brand uses de-ionized water to dilute this product. While it prevents rust formation, the water will not accelerate rust in parts that have caught some corrosion. 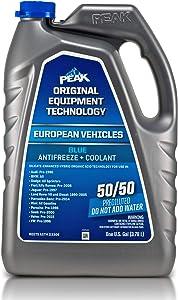 PEAK OET is perhaps the cheapest OEM-recommended antifreeze, and you don’t need to add water since it’s already diluted. The product boasts an advanced formula of a blue silicate and Enhanced Hybrid Organic Acid Technology to make the concentrate.
Check Price at Amazon

PEAK OET is perhaps the cheapest OEM-recommended antifreeze, and you don’t need to add water since it’s already diluted. The product boasts an advanced formula of a blue silicate and Enhanced Hybrid Organic Acid Technology to make the concentrate.

This model is recommended to use in an entirely flushed system to get the 150,000 miles of service life advertised. Nevertheless, you can top it in a system with a similar antifreeze for excellent cooling and boilover protection. You can use it in a Volvo, Jaguar, BMW, Audi, and most European vehicles.

I hope you now understand why you cannot mix red and green antifreeze. It can be detrimental to your engine and cooling system, so it’s best to use the antifreeze that your car’s manufacturer recommends.

Nevertheless, Valvoline antifreeze is a great product that you can top off regardless of the antifreeze your engine uses. But for those looking for a Dexcool brand, Zerex DEX-COOL proves perfect for American vehicles’ cooling needs. Meanwhile, anyone with a European car that takes SI-OAT blue antifreeze will find the PEAK OET a capable brand in extreme temperatures.

Read more: What Kind of Refrigerant for My Car: All The Honest Overviews